In the coastal communities of the Carolinas, Low Country Boil became a popular way to cook seafood for a crowd.

Low Country Boil is a classic southern dish, originally known as Frogmore Stew or Beaufort Stew. These two names come from a little town called Frogmore and the county of Beaufort in South Carolina.

This is a wonderful recipe that staggers the cook times of the components so that everything is cooked to perfection and delicious. You can vary the quantities of the ingredients to suit the taste of the crowd you are cooking for.

If you prefer to make this with live blue crabs instead of crab legs, allow a few extra minutes for cooking the crab before adding the shrimp. Serve with melted butter and cocktail sauce. 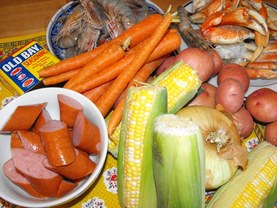 In a very large pot with a lid, bring about 6 quarts of water to boil; add Old Bay. Carefully add potatoes to the pot and allow them to cook for about 5 minutes.

Add sausage, carrots, and corn. Cook until the potatoes start to get a little tender, about 10 minutes.

Add crab legs and cook 4 minutes then add shrimp (they can have the heads on or be de-headed).

Return water to a boil and cook for 4 more minutes or until the shrimp are opaque. 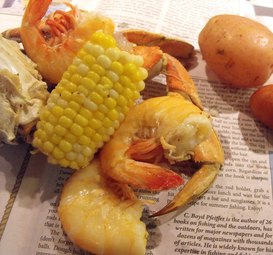 Carefully pour the cooked food into a colander to drain, then serve on a platter or in the traditional way--on a table outdoors that has been covered with newspaper.