You are here: Home / Beverages/ Drinks / Icy Refreshment–from my garden 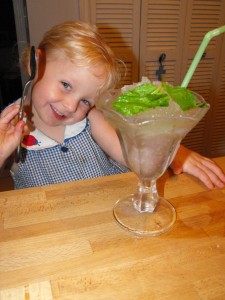 Last year I accidentally discovered a wonderful shave-ice stand near our neighborhood. I am not technically a big fan of ice or anything frozen, but the summer was very hot and a friend insisted we try it.

To my surprise, they really got it right! The texture of their ice was absolutely perfect—not gritty or crunchy but melt in your mouth perfection. The only problem was that their syrups tended to be more of the neon colored artificial flavor type.

As my kids gobbled up bright red cones of stickiness, I tried not to think of the repercussions later when the artificial flavors and dyes kicked in. There was also a minor addiction issue. It was after all a really hot summer! Even at only a few dollars each for our family of four, it ended up being a bit of an investment from our summer slush fund.

My interest was piqued when I discovered a shave ice machine at our local Cost Plus World Market. My son had big dreams of spending the $25 to buy one and launching a successful career as a shave ice expert. I thought it would quickly pay for itself with convenience and savings IF it actually worked (unlike the Snoopy Snow Cone Machine I was disappointed with as a child).

We got the snow cone machine and to my surprise it is fabulous. The ice shaving can be adjusted depending on your preference, but it will even shave it fine enough for my taste. With that accomplished, we did end up with one neon bottle of bright red syrup my son desperately wanted, but I decided to create some syrups of my own.

A few years ago I went on a simple syrup kick and made and kept it in the refrigerator all summer to quickly create fresh squeezed lemonade with a herbal infused sweetness, or iced tea that was extra refreshing. But I thought, ‘Why not use that instead of the fake stuff that is standard snow cone fare?’

I whipped up a few batches with some of my favorite herbs from my garden, fully expecting to end up having to delegate them as being for the adult snow cones. To my surprise, my kids were fighting over who got to eat the rosemary-lavender snow cone. They were delicious and though they are still technically a “treat” not intended for consumption every day, I feel less guilty letting the kids enjoy these instead of the more artificial options.

Syrups without artificial colors and flavors

Combine water and sugar in a small saucepan. Bring to simmer and stir until sugar dissolves, then immediately remove from heat (do not allow sugar to cook and caramelize—this will change the flavor). Stir in the herb and allow to cool to room temperature. Strain and store in refrigerator. These are excellent poured over shave ice for a more “gourmet” option, or stirred in iced tea as a flavored sweetener.

The syrup will keep for several weeks if refrigerated. 1 TAB = 1 serving

Another beautiful Saturday morning at the #farmers

Happy Friday, we are enjoying the calm before the

We had a delicious dinner for our Oktoberfest clas

Happy Labor Day! It is always bittersweet to reach