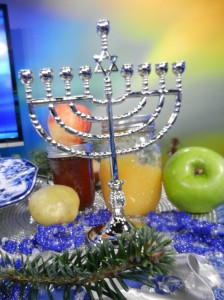 I enjoy learning about the holiday traditions of other cultures, especially when they involve food.

Latkes are the traditional food of Hanukkah. The oil they are fried in is symbolic of the oil that was used during the celebration of the Macabeeʼs victory in reclaiming the Temple after it was desecrated by the Romans.  Tradition states that although they had enough olive oil for the Menorah to burn for only one night, it lasted the 8 nights necessary to make more oil for the temple.

The Garlic Chives and Rosemary give fresh herb flavor to this potato dish.  If you have difficulty finding garlic chives, you can substitute regular chives or green onions.

Grate the potato and squeeze out all excess moisture with several paper towels.

Stir in the rosemary, garlic chives, and eggs. Add enough matzo meal to keep the mixture wet but not sticky. Add salt and pepper to taste.

Pour enough oil in a large sauté pan to have about ¼-inch thickness. Heat to medium heat then scoop about 2 TBSP potato mixture into hot oil. Press flat with your spatula and cook until golden brown, then flip to brown the other side.

Remove browned latke to a plate lined with a paper towel. Place in a 350°F oven to keep warm while you cook the remaining potato mixture. When oil is hot enough, you can cook several latkes at once.