Today we celebrated what would have been the 100th Birthday of someone who in my opinion was one of the greatest “Food Enthusiasts and Kitchen Enablers” of our time.  Julia Child inspired many, including myself, to learn more about the amazing and delicious foods from France.  Although my whole life I dreamt of traveling to Europe, it was after reading her book “My Life in France” that I decided France was exactly where I needed to go!

When I traveled to France, there were many wonderful things I wanted to enjoy, but high on my list was taking a class at Julia’s Alma mater, Le Cordon Bleu.  This class was one of the first things I booked after reserving my airline tickets.  I will admit it was very challenging to communicate with them at times.  Language barriers and time zone differences seemed to delay the confirmation of my class for far too long.  But eventually my schedule was set and I was very excited  about the course I would take there.

In Paris, I met many wonderful Parisians that shared my passion for food.  I was surprised that they looked puzzled when I mentioned that I was taking a class at Le Cordon Bleu.  I thought it was the most famous culinary school in France but realized after my visit and speaking with the residents I met there that Cordon Bleu seems to be far more popular here in America.  Regardless, I paid quite a large sum of Euros, planned my visit, and was beside myself with anticipation of my experience there.

When I arrived for my class, I must say I was surprised at the size of the school.  One multi-level French building was quite cramped with all of the essentials for their operations.  Based on my experiences with culinary schools in the United States, I anticipated a multi building campus, something that would take up at least a block.  However, we walked into the reception/gift shop/administrative office area and I realized that even the “famous” culinary school was subject to the space restrictions of Paris real estate.  I wandered through a small labyrinth of levels and passages to the class room.

I will be honest, I was really looking forward to the coffee they promised on our arrival for the class.  I had imagined that it would be accompanied by some small tastings of confections that students in the school had prepared.  I was more than happy to taste test some class projects.  However, their “coffee” was just that, coffee…or water.  Nothing more.  I also asked if the school had a dining room where patrons could visit and support the students by buying a meal (a practice I am very fond of at many American culinary schools) and was shocked that they don’t offer that either.

As the other guest-students arrived for the class, I realized that almost everyone was from the United States with the exception of one lady and her daughter from Great Britain.  We headed out onto the streets of Paris as one giant mob of 20 English speaking tourists with three guides: our instructor (a Frenchman who spoke fluent English, but with an Australian accent), a translator (who was from Great Britain), and a culinary student who was enrolled at Cordon Bleu and spoke both English and French. I think he was being trained to become a translator.  My class included a market tour of one of the many street markets of Paris. 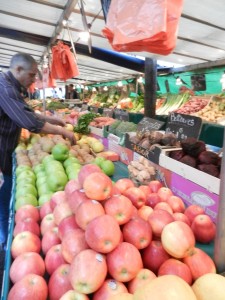 At some of the booths it was possible to see the merchants cringe in fear as we approached to poke, prod, and gawk en masse at their wares.  At other stalls, however, we were welcomed, encouraged, and given samples.  We visited every imaginable type of food stall, buying a buffet of samples that included seafood, cheeses, pastries, breads, meats, and fresh local produce.

Though the tour was enlightening, it was also frustrating because with a group of our size, communication was a huge challenge.  It also made things tough because we were not able to really shop for our own personal pleasure because we needed to stay with the group.  However, it was not possible for most of us to return to the market to shop later since it only was set up in that location for a half-day once a week.

After our excursion to the market, we returned to the school where we were sardined around the table for our tasting.  It was evident at this point that they had not anticipated a group of our size because they did not have enough chairs or place settings.  However, after some scrambling, we eventually did find what we needed to accommodate all of our group.  Bottles of wine were opened, our food was plated, and we passed platters around the table for everyone to try a few nibbles of each dish.

It was disappointing that at this point our instructor left us to prepare for our afternoon class and, therefore, wasn’t available to explain what we were trying as we dined.  I was also completely SHOCKED that they opened a small jar of store-bought mayonnaise to serve with our food.  Of all of the foods that Julia raved about when it came to France, one of her absolute favorite things was their fresh, homemade mayonaise.  Dining in a culinary school, I fully expected them to provide us with this classic condiment prepared in house. Surely a student was capable of whipping some up. 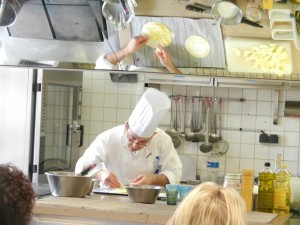 Chef Marc teaching us to make the Apple Tart

Our group grazed but saved room for the “meal” we had been told we would be helping to prepare.  As we were herded into the classroom for the “hands-on” demonstration, I was surprised to find the room was already half-full of other (mostly American) tourists.  We were filed into the back rows, then the demonstration was underway.  Our chef, Marc Vaca, was quite gracious and animated as he explained (in French) how to prepare: “Rissotto aux Truffles, Veau et Polenta aux Herbes et Asperges Vertes, Tarte Fine Aux Pommes, and Glace Caramel Au Sel de Guerande”.  While the school provided handouts with a list of the ingredients, they did not provide any written instruction on how to prepare the dishes.  As Chef Marc whirled through the demonstration, we realized that there was not going to be a hands-on portion to the class as many of us had expected.  Quite a few of the students murmured their disappointment about feeling misled.

It was humorous that at several times during the class our translator did not know how to communicate our questions in French, as was the protocol, to the instructor.  However, Chef Marc would break out in his accented English and explain it perfectly to both the translator and the class.  By the third dish, it was quite evident that most of us had given up on hand writing the extensive instructions for how to make all of the dishes which we were theoretically being taught to prepare.

Again, I was shocked to see yet another convenience food being used for our group as they unwrapped frozen, store-bought puff-pastry to make the Tarte.  Again,  where were the students that needed to practice making these classic ingredients?  When the question rose from the audience, the instructor explained that it is better to use frozen puff pastry than “poorly made” homemade pastry.  I would think that a culinary school that is proud of their pastry science program would have many capable culinarians that could satisfy the class’s needs for pastry. 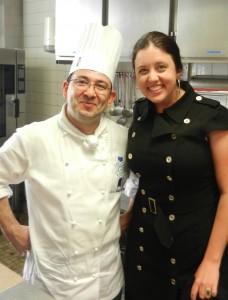 Though I did not experience what I expected at Cordon Bleu, I did enjoy Chef Marc

As the class drew to a close, we all anticipated sampling the feast we had watched Chef Marc prepare.  As the food was dished up it was indeed delicious.  However, the 3-4 bites we were given for each of the three courses were not a meal by any stretch of the imagination.  We also most certainly did not need the containers the school had encouraged us to bring (via email) for “leftovers”, and we were not even offered anything to drink with the samples we were served.

After we quickly finished the “petite” samples we were given, we were awarded our certificates for attending the school. They quite literally rushed us out of the classroom and through a hallway of eager textbook-carrying  culinary students  on the way into our room.

I’ll be honest, I was frustrated.  Chef Marc was charming and enjoyable, but the class itself did not match what other students and I had expected based from our limited communication with the school before coming to France.  This was intended to be a highlight of my vacation but it was mediocre at best.

Then it hit me. Julia was right!  To be honest, her opinion of Le Cordon Bleu wasn’t spectacular.  As I wandered by a poster of her on my way out to the lobby, I laughed to myself.  She had to fight to be allowed to study there and recounts in her book some of the challenges she faced with the faculty. Now they proudly tout her as an alumni.  I suppose this was yet another of those valuable life lessons proving that it isn’t exactly what you have but how you use it that can make the greatest difference in the world!

Thank you Julia for persevering at Cordon Bleu and for sharing your effervescent enthusiasm for France, their food, and the  people that have enriched the lives of so many.  I am positively certain that you are in a heavenly kitchen right now celebrating with an incredibly delicious birthday gateau!